US to face harsh revenge for Gen. Soleimani assassination 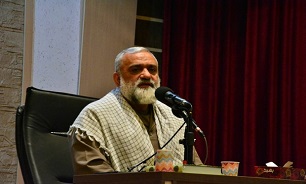 “The world will soon witness the Iranian nation’s harsh revenge on the US,” Brigadier General Mohammad Reza Naghdi said late on Sunday on the threshold of the 40th anniversary of the beginning of Iraq’s imposed war against Iran (1080-1988).

Referring to the longstanding support of the US to Iran’s enemies, the IRGC deputy coordinator said, “The battle with the US is not restricted to today; it has been going on for over four decades.”

“The US is incapable of coping with the Iranian nation’s resistance, and the Islamic Revolution gives Washington a big slap in the face every day.”

He underlined, “Our path in the fight against the American regime is clear; the revenge for our martyred general is definite.”

He shrugged off the US president’s recent threat of military action against Iran, saying that a “decisive, serious and real” revenge for the assassination of Lieutenant General Soleimani would be taken in an honorable, fair and just manner.

“We will hit the individuals who, directly and indirectly, played a role in the martyrdom of the great man (General Soleimani),” Major General Salami underlined, giving a serious warning that anybody with a role in the January assassination plot will be hit.

Downplaying the American threat of a response 1,000 times greater in magnitude, the IRGC commander said hundreds of Iranian missiles had been prepared to “devastate” the US targets in a possible confrontation after the retaliatory strike on the US airbase of Ain al-Assad in Iraq in January.