TEHRAN (defapress) – Russian President Velademir Putin on Wednesday called for an immediate ceasefire as fighting raged between Armenian and Azerbaijani Republic forces over the disputed region of Nagorno-Karabakh.
News ID: 82216 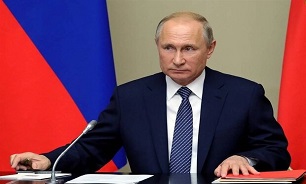 "We hope that this conflict will be ended in the very near future, but if it is not completely settled - apparently there is a long road ahead - but in any case, we urge the sides to cease fire", the Russian president said, Sputnik reported.

Russia has no obligation to defend Armenia in this conflict because they do not fight Azerbaijan on their territory, he added.

The clashes between Armenia and Azerbaijan in Nagorno-Karabakh have been going on for a little more than a week, with both sides accusing each other of breaching the ceasefire, shelling cities, and military infrastructure. Iran, Russia, and other countries have urged Yerevan and Baku to stop the fighting and return to the negotiating table.

Referring to the Nagorno-Karabakh conflict, Iranian President Hassan Rouhani said that the conflict should come to an immediate end and not spread to the region.