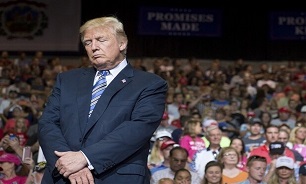 The Trump campaign argued that observers were stationed too far away to actually see the process of counting votes, and a lower court initially agreed with them, ordering that they be allowed closer to the process. The US state Supreme Court, which had previously rejected other Republican arguments, vacated that lower court order on Tuesday, Politico reported.

“We conclude the Board did not act contrary to law in fashioning its regulations governing the positioning of candidate representatives during the precanvassing and canvassing process, as the Election Code does not specify minimum distance parameters for the location of such representatives,” the court wrote in its majority order. “Critically, we find the Board’s regulations as applied herein were reasonable in that they allowed candidate representatives to observe the Board conducting its activities as prescribed under the Election Code.”

The Trump campaign called the ruling “inexplicable” and signaled the legal battle wasn’t over.

"This ruling is contrary to the clear purpose of the law,” Jenna Ellis, a campaign senior legal adviser, said in a statement. “The lower court rightly recognized that the intent and purpose of the Pennsylvania law is to allow election watchers from both parties to actually see the ballots close enough to inspect them, and thus prevent partisan ballot counting in secret.“

“It's inexplicable that five justices on the Pennsylvania Supreme Court would conclude that watchers observing from distances up to 100 feet away is reasonable,” Ellis added. “We are keeping all legal options open to fight for election integrity and the rule of law."

Word of the Pennsylvania Supreme Court decision came just as a federal judge in Williamsport, Pa., was suspending a key hearing on a separate Trump campaign election lawsuit because of a problem with phone lines set up to listen to the session. In that hearing, Trump’s personal lawyer Rudy Giuliani, who took the helm of the Trump legal team personally, argued that the state’s election tallies should be tossed entirely.

Giuliani reacted to the decision by saying it underscored why federal court intervention was needed.

Giuliani said that all 50 states have some provision for election observers and that the Pennsylvania court was disadvantaging the state’s voters by essentially gutting the requirement.

But a dissenting opinion in the state Supreme Court case rejected an argument that even if observers could not meaningfully watch the process, it didn’t mean ballots should be disqualified.

“Short of demonstrated fraud, the notion that presumptively valid ballots cast by the Pennsylvania electorate would be disregarded based on isolated procedural irregularities that have been redressed — thus disenfranchising potentially thousands of voters — is misguided,” Chief Justice Thomas G. Saylor wrote in his dissent, which was joined by one other justice.

Trump himself has used the fight over the observation process in Pennsylvania and elsewhere to falsely inflate a narrative of massive electoral fraud. “They wouldn’t let our Poll Watchers and Observers into the Counting Rooms,” he tweeted on Saturday. “We win on that alone!”

Instead, much of the legal effort from Trump and Republican allies has come up empty-handed.