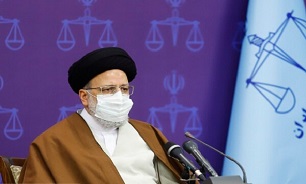 "Westerners who call for restraint in the face of terror are actually showing greenlight to terrorists," he said in a local judicial event on Monday.

The remarks come as European countries have called on Iran to show 'self-restraint' in response to the assassination of Iranian top scientist Mohsen Fakhrizadeh on Friday.

Raeisi also urged related military, judicial, and security officials to form a special task force to identify and prosecute those behind the assassination.

Naming Fakhrizadeh as the 'hero' of 'nullifying sanctions and threats' in defense and nuclear fields, Raeisi said "Experience shows that to counter sanctions and terror, one should only become stronger."

The logic of 'producing power' has become the mindset of Iranian youth in different fields, he said, adding that one should not neglect to adopt deterrent measures against the enemy as "it only understands the language of power."

Sanction and terror are two sides of the same coin and it is a mistake to pin hope on the lifting of sanctions through negotiation, he added.