Russia resumes Baltic pipeline construction in defiance of US

Tehran (Defapress) - Russia has resumed after a one-year hiatus the construction of a highly controversial pipeline project that is set to send natural gas to Germany, in clear defiance of US opposition and sanctions imposed on Moscow over the plan.
News ID: 82721 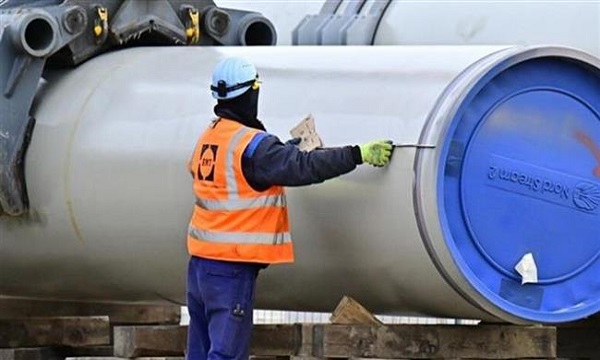 According to ship monitoring data released on Saturday, the Russian pipe-laying Akademik Cherskiy vessel sailed into position to resume construction of the German-Russian gas pipeline, known as Nord Stream 2, in the Baltic Sea.

The data showed that the vessel had reached the area off the coast of Poland where a section of the Nord Stream 2 pipeline remains uncompleted.

Another Russian pipe-laying ship, Fortuna, sailed off from the German port of Wismar, apparently heading to a different location where another pipeline section is to be built.

Russia’s energy giant Gazprom, which is behind the $11.6 billion pipeline project, had already said it was going to resume the construction work on December 5.

The resumption of the project came as US lawmakers agreed to extend sanctions on companies involved in the construction of the Nord Stream 2 natural gas pipeline.

The US ambassador to Berlin swiftly reacted to the Saturday news and urged the German government and the European Union to put a temporary halt to construction work on the pipeline to send a signal to Moscow.

Washington claims that the pipeline project, which has become a flashpoint in relations between Russia and the West that have sunk to post-Cold War lows, compromises European energy security.

“This pipeline is not just an economic project, but the Kremlin’s political tool to bypass Ukraine and divide Europe,” Robin Quinville, acting US ambassador to Berlin, told Germany’s Handelsblatt daily.

Washington imposed fresh sanctions against the Nord Stream 2 in October, targeting businesses that provide services or funds to upgrade or install equipment on ships that are being used to lay the pipeline.

Swiss-based company Allseas, which has been laying the pipeline, suspended operations in December last year because of the US sanctions targeting companies providing vessels.

The the 1,230-km Nord Steam 2 will deliver Russian gas via the Baltic Sea, bypassing Poland and Ukraine. The Turk Stream 2 will carry gas through Bulgaria.

Germany currently imports around a third of its gas from Russia through Ukraine.

Russia has decreased the amount of gas it delivers to Ukraine since the rise of a pro-Western government in Kiev in 2014. Ukraine’s Western allies imposed sanctions on Russia after the Black Sea peninsula of Crimea rejoined Russia that year.

Chancellor Angela Merkel has faced increasing criticism over the Nord Stream 2 pipeline. Pro-US German politicians from different parties have called on her to stop the project, which they say would affect Germany’s ties with major allies in the Baltic region, especially Poland.