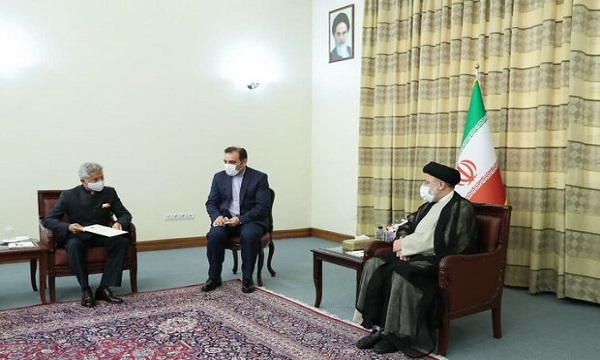 The Iranian President-elect Ebrahim Raeisi received the visiting Indian Minister of External Affairs Subrahmanyam Jaishankar for a meeting in Tehran on Wednesday afternoon.

Jaishankar arrived in Tehran on Wednesday afternoon to convey a congratulatory message from the Indian Prime Minister Narendra Modi on Raeisi's victory in June 18th presidential elections in Iran.

In the meeting, the Iranian president-elect said that "The stability and durability of relations between the two countries, especially in the economic field, requires regulating them based on sole Tehran-Delhi interests."

Raeisi added that "Collective security with the participation of countries in the region, including Iran and India as two important regional players, as well as extensive economic ties are important priorities for the relations between the two countries."

He further said that "The Islamic Republic of Iran supports stability, security and peace in Afghanistan."

"Today, the Americans themselves admit that their Maximum Pressure campaign against Iran has failed and the Islamic Republic of Iran will continue its progress vigorously."

The Indian foreign minister, for his part, conveyed to Raeisi the message of India's Prime Minister Narendra Modi and thanked the president-elect for the meeting.

Jaishankar also said that "For Iran and India, as two very close regional partners, it is vital that they work together to tackle different challenges."

Pointing out that Afghanistan is in a very critical situation now, the Indian Foreign Minister added, "Afghanistan's neighbors must work together to solve the country's problems."

The top diplomat also invited Raeisi to visit India at the official invitation of Prime Minister Modi, adding that "Mr. Prime Minister has expressed confidence in his message that the strong relations between Iran and India will continue to grow and expand during your presidency."