Ukrainians victim of US evil policies

TEHRAN (Defapress) - Referring to the recent developments in Ukraine, Iranian President Seyyed Ebrahim Raeisi said that people of Ukraine have fallen victim to the evil and vicious policies of the United States.
News ID: 83912 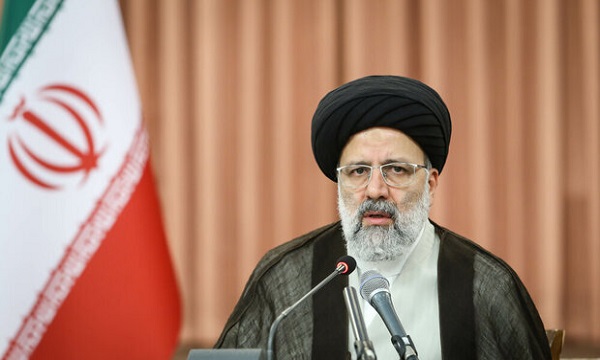 Speaking in a Cabinet meeting on Sunday, President Raeisi stated that Islamic Republic of Iran is against war in the world and thinks the end of the war benefits all nations.

He seized this opportunity to felicitate the National Day of Guard (Pasdar or IRGC troops), which marks the auspicious birth anniversary of Third Imam of Shia Imam Hussein (PBUH) and emphasized that revolutionary guards are the source of pride, honor and prestige for the country.

Today, dignity of the country is indebted to the salient services and measures taken by the Armed Forces Especially Islamic Revolutionary Guards Corps (IRGC).

Elsewhere in his remarks, President Raeisi pointed to the foreign visits of ministers and government officials and stressed that these visits play a leading role in developing and strengthening relations with countries.

Head of Supreme Council of National Security then referred to the latest developments pertinent to the talks which is ongoing in Austrian capital of Vienna on the removal of anti-Iranian sanctions and added that Ministry of Foreign Affairs and negotiating team are pursuing talks diligently but the government will not link any move to the outcome of negotiation and JCPOA.

Emphasizing the regional issue and Ukraine crisis, President Raeisi stated that people of Ukraine, like people of Afghanistan, Yemen and Iraq are victim of the policies of the United States.