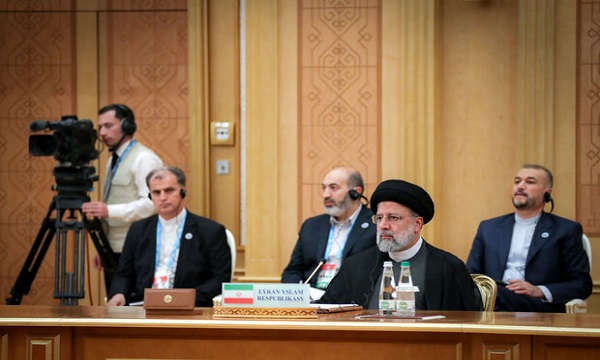 "I hope the holding of these meetings will bring security, stability, peace and friendship to the people of the region," the President of Iran said in his address to the meeting of heads of states of Caspian Sea littoral countries in the Turkmenistan capital of Ashgabat.

The President described the Caspian Sea as a sea of cooperation and stated that "Cooperation of the Caspian littoral countries, especially due to international developments, has become increasingly important and this interaction not only will lead to an economic boom and increased prosperity for our nations but also strengthens regional peace and stability and solves the issues of the Caspian Sea region through reliance on the littoral countries' capabilities [with no foreign powers presence]."

"The Islamic Republic of Iran considers the Caspian Sea as a sea of peace and friendship and a factor in the linking and bringing together the people of the region," President Raeisi also pointed out.

He also called for protecting the sea's fragile environment and reasonable use of its aquatic resource in line with the aim of economic development and promoting the welfare and security of the littoral nations.

He further pointed "After the lifting of the Covid-19 restrictions, we have seen a significant increase in political and economic interactions between Iran and the Caspian Sea littoral countries."