Martyr Morteza Qaffari's will, Martyrdom is the best kind of death

Martyr Qaffari has stated in his will: "Martyrdom is the best kind of death. Dear ones! Do not think twice in the world; do not think that humans have eternal life in this world. "
News ID: 67575 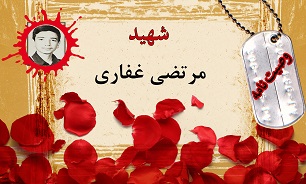 According to the reporter, "sajad Shahid m Ghaffari» the year1954 eyes. He started with the imposed war against the right front was revoked and was eventually elevated to a degree in the year 1982 fkh achieved martyrdom.

The text of this letter that made the martyr is a souvenir to more visited:

Now, what better man to die in such a way that it’s time to survive in this world and in the hereafter is better and have a nice place that man a martyr of this world.

Martyrdom is the best kind of death, the thought of the two-day world loved ones don't, do not think that the man in this world of life eternal. According to Hazrat Ali (a.s) world is a good bus, such as a bridge to reach the world's it all anyway to open the right back. «Anallah of Enna and far better that what the man had "rajaon earlier than this bridge passes go God only I'm afraid and Pahlavi is not acceptable aamalm and shhadatm do not have the right to accept. I wish when I wanted my quiver from this world, to go to the hole. My pieces to be forgiven and clean all the gnahanam glory of this world I go. Not that you're no longer an upper God talk to anyone I went it was good what's wrong I have that nerftem.

The other God is everything in this world with me next to you, next to Tiger martyr  Hatami, Mohammadi, Sadiq and martyr Khani, dirt and kiss on the foot of Abu Abdullah see Mahesh.

The parents of a baby after going I don't cry, but I cry for those who still have not found themselves. Cry had the astray from God and ask that their conductivity or it or from around the world.