Enemy using the gap between Sunnis and Shia brought Takfiris

The head of the armed forces general said the enemies after the end of the imposed war checked the Islamic world and created the Takfiris using the Shiites and Sunnis.
News ID: 67716 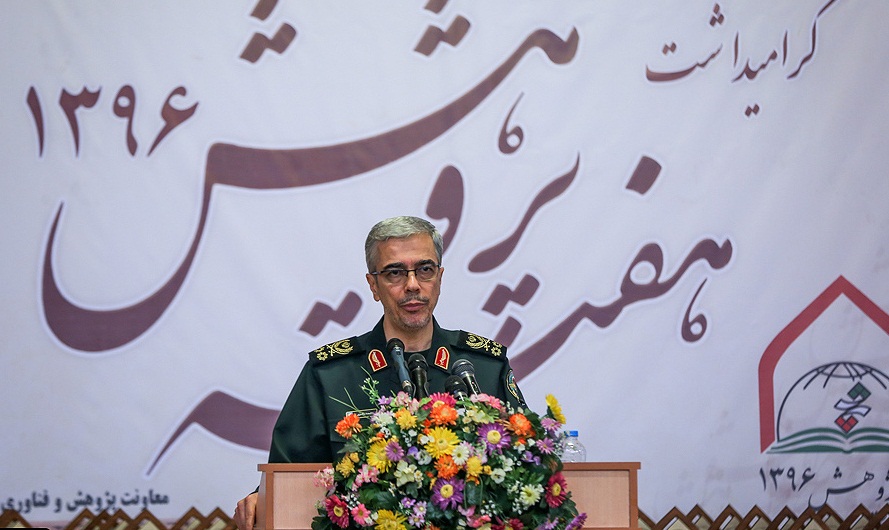 According to defapress reporter, "major General Commander, Mohammad Baqeri» armed forces Chief of staff at the Conference celebrating the Corps's top researchers this morning in the comprehensive University of Imam Hussain (AS), held the front, congratulate the victory of resistance, stated: the formation of the Islamic revolution and after the events of ASP This is the result of a long thought and the theory that during the life of the Shiite clergy and elders formed at Imam Khomeini (RA) role.

He added: in recent centuries the world arrogance that path during the industrial revolution with the ages of 16 and 17 centuries with the conquest of the Islamic lands and take the material resources of countries as well as shaping science and knowledge according to your goals and move to the side of the one that a number of countries And the people at the top of the pyramid are the power and resources of the world to look at and this leadership also guaranteed them.

The armed forces Chief of staff continued: our country as a country of the third world or exploited or to the appearance of independent action; but the Islamic revolution was based on the social demands of the MD created; but a couple of hundred-year-old Shia and the target, the ideal and the theory.

He added: in the Holy defense operations that were performed, in particular, operation dawn 8 Arvand River crossing which took place successfully, with none of the warriors were seen training, it was not possible, but that the operation was successful because of a thought and thinking. After the war, as well as the enemies of the Islamic world and thinking deep, check vulnerable spots were found and use these points, and the gap between Sunnis and Shia, Muslims against action; so why aren't takfiri to create comfort, but a lot of effort behind them.

Major General Bagheri said: that of thinking and use a number of vahabi youth of Islam, a group with information and deceive them ready for suicide operations and zealand John is another part of the Muslims is not simply a small plot, so if it does not deal with firmness two Years and centuries of Islamic world your busy.

He reiterated: the program from your small groups started their actions gradually went up all over the world in the war but thought a thought on this topic and it works until it led to the defeat of the takfiri.

The armed forces Chief of staff said after the 33-day war of 2006 's top Sayyed Hassan Nasr was the popular face of the Arab world but after that the enemies of the Islamic world issues among Shia and Sunni were created, and this time found her ratings decline was through trying to do differences among Shiite and Sunni *.

He said other plots in a way; different religious conspiracy after conspiracy was sinister that it was plain that the subject of Iraq analysis was; all the countries in the region are several West Asian ethnic groups, therefore using the issue immediately raised the issue of ethnicity; even though there's the Hulk cheats But somehow the Act of which the fortunes there.

Major General Baqeri continued: here's a thought behind it was, but with the right front in the facilitation of workshops took place, it beat the conspiracy; today we put a thought in a battle, and if we fail to provide a short basic and we incur and that several centuries of effort and Martyrs, to the wind and goes for the ages on the other will happen.

Stating that in all human fields, medical, industrial and technical, so there is heavy fighting, said: If the people of Iran's dignity and security, achieve strategic deterrence; this is a deterrence that compared the cost and benefits, the enemy has to conclude that the cost cannot be compared to not avail; lz OBO this thread cause the deterrence it is not permanent; void alive and deterrence fronts day and night.

Major General Baqeri continued: I'm American officials in speech research centers or industrial and defense study to speak; if I say that there are operations on the night and the world stand against it and if the moment close eyes, the enemy will be destroyed; to speak in such a way That is our only rational speech in front of the verses and traditions.

The armed forces Chief reiterated: estimation of the show within a few months the amount available from the beginning of humanity science twice. This astronomical speed and eye-catcher, the enemies are in development and we are win the right to have and being on top; therefore, this requires a short route in this way and to not miss the moment, progress.

Stating that the leadership in various expressions to practical power as the key to excellence have attention and amount of his attention for publicly and reportedly is remarkable, said: the issue of Break up knowledge, software, not associated with movement, movement to the attention of others, based on the translation resources and authorities to Android "Creative, trying to become the science and technology pole, creating the solar system. Only a part of the leadership of the of key word.

Stating that the fundamental issue we are manpower and training researchers and theorists of education moving toward Islamic revolution and Islamic revolution of education is the key, said it when we decided to capture the individual training and education, the basic issue. This thread and getting to that level requires a comprehensive map of the academic at the University of Imam Hussain (AS) for this map.

Major General stating that you must eat the unfortunate Bagheri in knowledge management in the great success of Holy Defense had noted: what amount of experiences and successful or failed in the performance of sacred defense or defense of the ahlulbayt (AS)privacy reviewed and used? What is the value of the experience Corps in front of terrorists and the establishment of border security in the Northwest of the country has been formulated.

Noting that the primary step still talk about our experiences and performance during the sacred defense and so it is that the show is not enough and reactive acceptance, stressed: our managers in the research collection must be the most elite of the sacred defense researchers are also the most courageous; And the most knowledgeable person as Director and was elected commander; therefore, in the present situation must also be of the same species.

The armed forces Chief said: perhaps the creation of the Association or the necessity of coming together to stem the elite; 300 believers that the revolution can shrink the country together with more speed.

He was the final player step by step removal with stating in scientific Jihad is a great step in the direction of removal and less of military Jihad, title: notification on the release and promotion of knowledge and helps prevent duplication of course; in this way may be obstacles and the challenge Such is not familiar with the route managers or financial problems exist, but the goal is so big that managers should also fix the obstacles and barriers elite should make no API.