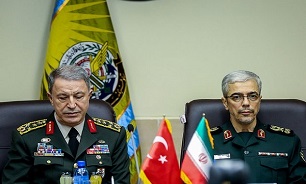 He stressed that it is imperative to maintain the Syrian territorial integrity and that Turkey’s military operation should not harm the tripartite political talks which have to be successful so far. He also emphasized that no harm should come to the innocent civilians within the operational zone.

During their conservation, Akar explained to Bagheri that the main reason that Turkey started the military operation in Syria’s Afrin was to confront the terrorist groups which had gathered in the area and the threat they posed against Turkey’s villages and towns of Turkey. He stressed that the Turkish army’s operation is well within Turkey’s right to self-defense.

He assured Bagheri that Turkey remains committed to its agreements with Iran and Russia, even as it respects Syrian territorial integrity.