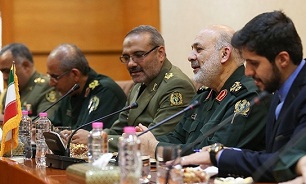 TEHRAN (Defapress)-"Sustainable security processes in West Asia region are impossible without the Islamic Republic of Iran's presence," General Taqizadeh said in a meeting with Indian Navy Commander Admiral Sunil Lanba on the sidelines of the Indian Ocean Naval Symposium (IONS) conference in Tehran on Wednesday.

He said that given Iran's adjacency to the Indian Ocean and the Persian Gulf and its constructive role in the security of the Strait of Hormuz, the country plays a vital role in the region's maritime security.

"Afghanistan, Pakistan, the Sea of Oman and the Indian Ocean are an important part of the common security zone between Iran and India and given the existence of extremist and terrorist streams and thoughts, the two countries can cooperate on common threats and interests in their share security zones," General Taqizadeh said.

He also underscored Iran's pivotal role in the establishment of stability and security in the region and termination of the ISIL terrorist group's rule.

"This region needs utmost interaction and cooperation in all fields to remain in full tranquility and security and the Islamic Republic of Iran, as a pioneering country in war on terrorism, is ready to share its experiences in this regard with the Indian Ocean littoral states," General Moussavi said in a meeting with Chief of Naval Staff of Pakistan Navy Admiral Zafar Mahmood Abbasi on the sidelines of the Indian Ocean Naval Symposium (IONS) conference in Tehran.

He expressed confidence that the Indian Ocean littoral states are able to establish security in this strategic region, stressing that presence of the trans-regional countries in the region brings nothing but insecurity.

Admiral Abbasi, for his part, underscored Iran's long-time presence in international waters, noting that the country's experiences can be highly important and effective in the establishment of security in the sensitive and strategic region of West Asia and Indian Ocean.

"We hope to take effective steps with the support and partnership of you, the navy commanders, in the next two years to materialize the goals that we have defined," Rear Admiral Sayyari said, addressing the closing ceremony of the IONS conference in Tehran.

He added that the decisions include establishment of a regional center in Iran's Chabahar port to train and combat piracy, formation of a combat as well as a relief and rescue group, start of air and naval patrols, sharing of technical capabilities and equipment and establishment of contact lines among the naval commanders of the Indian Ocean littoral states.