Secretary of Iran’s Supreme National Security Council (SNSC) Ali Shamkhani pointed to US malicious act in the region and said, “US intends to shift terrorism from Syria and Iraq to Afghanistan.”
News ID: 69875 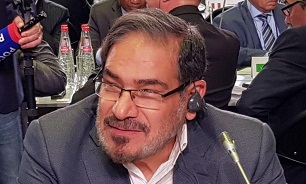 TEHRAN, (Defapress) – Under such circumstances, Asian countries should be vigilant, he said, adding, “Iran is seeking participation of other influential Asian countries to join anti-terror campaign.”

Real Admiral Shamkhani made the above remark in the 9th International Meeting of High Representatives for Security Issues before leaving the Russian resort city of Sochi for Tehran.

He pointed to continuing hostility and enmity of the US against independent states including Iran and said, “in the national security documents of the United States, measures have been envisioned for exerting pressure on independent states such as China, Russia and Iran and causing insecurity in these countries.”

This conference provided suitable opportunities to hold constructive talks on security cooperation with representatives of various countries and in this regard, a joint meeting was held in the presence of Russian and Pakistani officials to kick start such security cooperation, Shamkhani reiterated.

He further noted that this year’s Conference was held at a higher level both qualitatively and quantitatively than the previous editions.

Positions adopted by the Islamic Republic of Iran were highly welcomed in this edition of Conference, he said, adding, “constructive talks were exchanged in this meeting, the most important of which were the growth of terrorism in the region and how to fight against terrorism, implementation of Joint Comprehensive Plan of Action (JCPOA), the official title of Iran’s nuclear deal, for spread of peace and security in the region.”

The two-day security conference was inaugurated in the Russian resort city of Sochi on Wednesday in the presence of directors of intelligence services, secretaries of national security councils, ministers and presidential aides from 110 countries.

The main topics of discussion during the two-day international conference included as follows, ‘international crises: from conflict to dialog’, ‘tactics and strategies of international terrorist organizations’, ‘security of international information: global responses to the global challenges’, and ‘production and distribution of narcotic drugs: a threat to global peace and security’.