TEHRAN (defapress) – President Rouhani said that terrorist groups are supported by countries who claim that they are fighting terrorism.
News ID: 72651 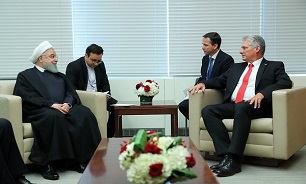 He made the remarks in a meeting with Cuba's President Miguel Díaz-Canel on Monday in New York.

Rouhani congratulated his Cuban counterpart on his election as President of the country and appreciated the sympathy of the Cuban government and people with Iranian people over the Ahvaz terrorist attack, saying “Cuba has always been considered a revolutionary country in the minds of the Iranian nation, and two nations have always fought with imperialism and unilateralism.”

The Iranian President emphasized that the Islamic Republic of Iran is seeking more developed and closer relations with Cuba, and noted, “there is good cooperation between the two countries in various sectors, including pharmaceutical technologies and vaccine production, which we should try to cement.”

“There are many opportunities in economic, scientific and technological fields in Iran and Cuba that must be used to further develop relations between Tehran and Havana.”

Pointing out that the US government has violated its agreements with Cuba over the past years like its other agreements, Rouhani added, "they have also withdrawn from JCPOA in violation of international regulations.”

Referring to the fact that today's terrorist groups are unfortunately supported by countries that claim to be countering terrorism, Rouhani said, "combatting global terrorism is one of the important and common goals of the two countries in their relations and cooperation.”

Cuban President Miguel Díaz-Canel, for his part, also expressed condolences and sympathy of the Cuban government and people to the people of Iran for Ahvaz terrorist attack, emphasizing the need to develop and strengthen Tehran-Havana all-inclusive relations.

“Developing relations with the Islamic Republic of Iran is one of Cuba's most important principles in foreign policy and the strong recommendation of the late leader of the country, Fidel Castro,” he highlighted.

He also hailed the intelligence and determination of the Iranian government in negotiations with the 5+1, adding, "US' withdrawal from the nuclear deal is going backwards and is posing a great threat to international agreements and security of the region.”

Cuban President stressed the need to combat unilateralism of the US government, saying, "we should work harder than before to develop and strengthen relations and cooperation between the two countries, especially in economic, medical and technological sectors.