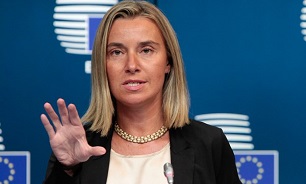 Mogherini's remarks came after the EU foreign policy chief and foreign ministers of France, Germany and Britain in a joint statement vowed to protect the European firms doing business with Iran.

The EU foreign policy chief and three European foreign ministers in their statement slammed the re-imposition of Washington's fresh sanctions on Iran.

The statement described the 2015 agreement as "crucial for the security of Europe, the region and the entire world", adding, "It is Europe's goal to protect European economic operators engaged in legitimate business with Iran."

The statement also vowed to preserve and maintain effective financial channels with Iran, and the continuation of Iran’s export of oil and gas.

"These efforts have been intensified in recent weeks, particularly those underpinning the European initiative to establish a Special Purpose Vehicle (SPV) on which we are proceeding with work to set up,” the statement said.

According to the statement, the SPV will enable continued sanctions lifting to reach Iran and allow for European exporters and importers to pursue legitimate trade.

The statement also hailed Iran's commitment to the Joint Comprehensive Plan of Action (JCPOA), as confirmed by the International Atomic Energy Agency (IAEA) in 12 consecutive reports, and vowed to "remain committed to implementing the JCPOA as a matter of respecting international agreements and of its shared international security".

The reaction came after the US Treasury Department announced all sanctions on Iran lifted under the 2015 nuclear deal will be back in force on November 5.

The November 5 sanctions will be the second batch of bans to be re-imposed after Trump pulled the US out of the 2015 deal, which was signed by Iran and six world powers in 2015.

The sanctions reinstated on Iran on May 8 included boycott of Iran's crude supplies and bans on transfer of its crude revenues. There is a 180 days interval before these sanctions come into effect. Other US secondary sanctions are reinstated this month.