TEHRAN (defapress)- Iranian Parliament Speaker Ali Larijani said the criminal acts of Israel against Palestinians must be heard by the entire world, denouncing the brutalities of Tel Aviv to crack down on the oppressed Palestinian nation.
News ID: 74519 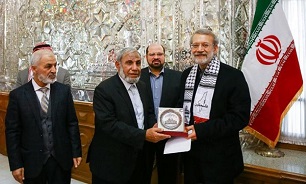 “Supporting the deprived people of Palestine is a responsibility for every conscientious human,” Speaker of Iranian Parliament Ali Larijani said on Saturday afternoon in a meeting with a visiting group of Palestinian MPs.

Referring to the crimes committed by the “Zionist regime”, especially in the Gaza Strip, Larijani pointed out "the criminal acts of this regime must be heard by the entire world,” adding that disclosing and revealing the regime’s crimes against the deprived people of Palestine will provide more support to the Palestinian cause.