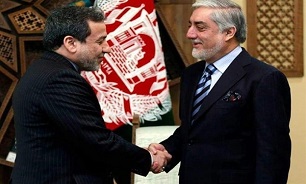 In a meeting in Kabul on Saturday evening, Araqchi briefed Chief Executive of Afghanistan Abdullah Abdullah on Iran’s talks with a delegation from the Taliban in Tehran.

The diplomat emphasized that the negotiations were held in coordination with the Afghan government.

Abdullah, for his part, praised Iran’s support and said bilateral relations between the two countries have been based on strong friendship and cooperation.

Back in September, Araqchi had visited Afghanistan and met with a number of high-ranking officials of the South Asian country, including Abdullah.

Speaking at a meeting with Araqchi in Kabul on September 11, Abdullah underlined the importance of his country’s relations with Iran and said the relationship will never be affected by a third country.

He said the National Unity Government of Afghanistan is willing to complete and sign the comprehensive cooperation agreement between the two countries.

In June 2017, Iran and Afghanistan held the first round of talks on the comprehensive strategic partnership document as part of efforts to boost bilateral relations in various areas, including security and defense.