Iran may switch to ‘offensive’ to protect national interests 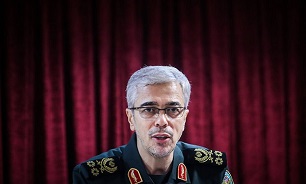 Speaking to reporters on Sunday, Major General Mohammad Bagheri, Chief of General Staff of Iranian Armed Forces, said Iran has no intention of attacking any country, stressing that “our defense strategy is to protect the independence, territorial integrity and national interests of our country.”

Bagheri noted that the country’s defense policy does not mean a purely defensive and passive approach during tactical operations, adding “while it is true that we have no interest in other country’s interests and territory, we may switch to an offensive approach to protect our own interests.”

He went on to add, “if there is any intention of attack against our interests, and we see evidence of it, we will not remain passive and allow the country’s security and peace to be endangered.”

“That is why our military drills this year in the Strait of Hormuz, the Persian Gulf, the Sea of Oman, or even on land or in the air, have had a change in their nature, and we will continue this trend until our armed forces are fully ready to make the switch in tactics if necessary,” he added.