Iraq to Defy US’ Unilateral Sanctions against Iran

TEHRAN (defapress)- Iraqi Power Minister Luay al-Khateeb announced that Baghdad has informed the US that it will not comply with the US’ unilateral sanctions against Tehran as the Arab country still needs Iran’s gas and electricity.
News ID: 77275 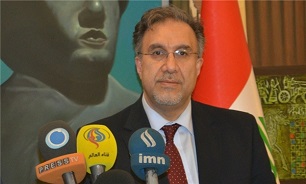 Al-Khateeb said in response to US demand to cut oil and gas imports from Iran that his country will need them for at least three years.

Talking to Iraqi media outlets on Monday, he reiterated that Iraq will need two or three years to achieve self-sufficiency in the field, which will be possible only if big projects are implemented.

If the big projects are executed within the next two or three years, “we will need no imports from Iran”, he said.

Earlier, The National Iranian Oil Company (NIOC) announced that will open a new office in Iraq to further ease the two countries’ cooperation in the oil industry and transfer of engineering and technical services to the Arab country following a new agreement between Tehran and Baghdad.

In a Friday meeting between Iranian oil industry equipment producers and senior managers of the Iraqi Ministry of Oil on the sidelines of the 24th Iran Oil Show in Tehran on Friday, the two sides agreed to let NIOC set up a representative office in Iraq to facilitate activities by Iranian producers and constructors in the neighboring state.

Speaking in the meeting, Qalambor Dezfouli said the gathering was aimed at providing Iranian constructors and producers with the opportunity to establish a closer connection with their Iraqi counterparts.

“We have been seeking to achieve this goal for about three years as Iranian producers and constructors are acting independently in Iraq. Currently, we aim to establish an NIOC representative office in Iraq to represent the Iranian Ministry of Petroleum in the country.”

He added, “We are seeking to work out solutions to enable Iranian producers and constructors to cooperate with Iraq’s private sector.”

Qalambor Dezfouli said the office will be responsible for connecting Iranian oil industry’s constructors and producers with the Iraqi Ministry of Oil.

“Given that Iranian constructors do not have international certificates and licenses, we are cooperating with the Iraqi Ministry of Oil to set up a mechanism through which those Iranian companies that are approved by the NIOC, receive approval from the Iraqi Ministry of Oil and, thus, be able to participate in the implementation of oil projects in the neighboring state.”

Zanganeh broke the news on April 7 during a visit to the Energy Industries Engineering and Design (EIED) Company, adding that "There are massive potentialities for expanding Iran-Iraq cooperation in oil, gas, refining and petrochemicals grounds, and Iran is ready to offer its capabilities to the Iraqi oil sector.”

He added that during the visit to EIED, which is affiliated to the Oil Industries' Engineering and Construction (OIEC), Iraqi Oil Minister Thamir Ghadhban learned about the capacities of the company, and it was decided that a joint partnership be established between OIEC and a similar company in Iraq in order to develop joint capacity utilization.

Zanganeh further pointed to Iran’s vast potentials in the oil, gas, refining and petrochemicals sectors, adding that "given the lack of development in the petrochemicals and gas industries in Iraq, there is a bright perspective for cooperation between the two countries."

The veteran minister noted that based on the talks between the two sides, Iranian firms can take part in the oil projects implemented in Iraq.

Noting that Iran’s gas dues from Iraq stand at $1 billion, Zanganeh said the Central Bank of Iran has been tasked to follow the process of receiving the money from the neighboring country.

Early in February, it was announced that Iran and Iraq share an estimated reservoir of 4 billion barrels of oil in Azar Oilfield, and Iran has recently completed the drilling operation for 7 wells in the field to tap into the shared natural resource.

The NIDC completed the operations to drill 7 wells in Azar Oilfield in Anaran block, in the western province of lIam, according to supervisor of the project Hossein Rahimi.

Rahimi added that the operations were carried out in line with the government's push to speed up production from the field, which is shared with its western Arab neighbor, Iraq.

The official added that each well has been drilled within an average of 470 days by domestic experts.

The field is considered as one of the most difficult reservoirs to drill due to the sequence of its low- and high-pressure layers and the large number of tubes for drilling and lining of wells.

Azar holds 2.5 billion barrels of in-place oil, but new reservoir studies on the field suggest a much higher figure of 4 billion barrels. It is one of the six joint fields with Iraq, along with Dehloran, West Paydar, Naft-Shahr, Azadegan and Yadavaran.