EU Seems to Be Obsessed with Anti-Russian Sanctions

TEHRAN (defapress)- The Turkish army is preparing its forces for an imminent military operations against the Kurdish militants in Manbij region in Eastern Aleppo.
News ID: 78098 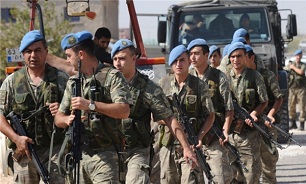 The Arabic-language Arabi 21 news website quoted informed sources as saying that the Turkish army has asked the militants under its control called the 'National Army' to become ready for military operations against the Syrian Democratic Forces (SDF) in Manbij.

They added that the demand has been raised during a recent military meeting between the National Army commanders and senior Turkish army officers, saying that the Turkish army has concurrently sent its special forces for reconnaissance operations to regions near the town of Tal Abyadh in Raqqa province in Northeastern Syria.

Meantime, the Arabic-language al-Baladi news website affiliated to the militants reported that the National Army is prepared to enter Eastern Euphrates region.

Relevant reports said on Wednesday that the Turkish army’s fresh military convoys comprising elite forces had arrived along the border with Syria as Ankara and its allied militants continued their attacks on the Kurdish militias’ military positions in Northern Aleppo.

The Ankara-backed militants of the Euphrates Shield launched mortar attacks on Al-Bab Military Council’s positions in the town of Kurhovik town in Eastern al-Bab in Northeastern Aleppo from their positions in Jeb al-Dam town, the Kurdish-language Hawar News said.

Meantime, battlefield sources reported that a new military convoy comprising the Turkish Army’s Special commando forces together with armored military vehicles and equipment was sent to the city of Kelis in Southern Syria and near the border with Syria.

The sources also reiterated that the Ankara-backed terrorists known as the National Army have reinforced their military positions in al-Daghalbash and Ableh regions near the Kurdish-controlled areas in al-Bab city in Northeastern Aleppo and deployed heavy military equipment in the region.