US Should Remove Sanctions against Iran to Prove Sincerity

TEHRAN (defapress)- Former Commander of the Islamic Revolution Guards Corps (IRGC) Mohsen Rezayee blasted US Secretary of State Mike Pompeo for his insincere remarks, stressing the need for Washington to remove all sanctions against Iran to give credit to his statements.
News ID: 78232 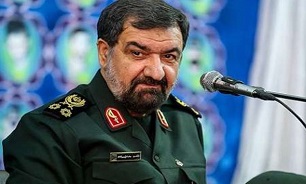 "The deceitfulness with which the Americans came to the scene is fully clear and their sincerity will be displayed when they remove all sanctions, return to the international agreements and sincerely say to the Iranian nation that they have made a mistake," said Rezayee, now the secretary of Iran's Expediency Council, on Wednesday.

He noted that the Iranian nation does not believe Pompeo's comments given the contradictions existing in the Americans' words and actions, and said the Iranian nation may accept they are sincere only once they acknowledge mistake and show in practice that they will not make any hostile move against Iran.

His remarks came after Pompeo said Iran had rejected his offer made July 25 to go to Tehran to address the Iranian people.

In a wide-ranging interview with Bloomberg Television, Pompeo had said, “I’d like a chance to go [to Tehran], not do propaganda but speak the truth to the Iranian people about what it is their leadership has done and how it has harmed Iran”.

But in a tweet on July 29 the Secretary of State said “I recently offered to travel to Tehran and speak directly to the Iranian people. The regime hasn’t accepted my offer”.

Washington withdrew from the internationally-endorsed 2015 nuclear deal with Iran in May 2018, reimposed the toughest-ever sanctions against the country and started a plan to zero down Tehran's oil sales.

Earlier this month, Spokesman of the Atomic Energy Organization of Iran (AEOI) Behrouz Kamalvandi said the country's uranium enrichment level now stands at 4.5%, but underlined that the degree could increase if required by political rationale.