TEHRAN (defapress)- Iranian President Hassan Rouhani in a phone conversation with Pakistani Prime Minister Imran Khan expressed concern about insecurities in Kashmir, stressing the need for Islamabad and New Delhi to find a diplomatic solution to the problem.
News ID: 78351 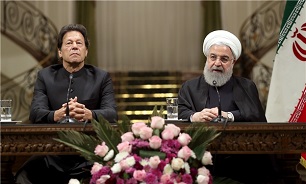 "The Islamic Republic of Iran has always endeavored to prevent tension and chaos in the region and we believe that the Muslim people of Kashmir should be able to exercise their legal rights and interests and live in peace and tranquility," Rouhani said during the phone conversation on Sunday.

He called on India and Pakistan to show self-restraint to prevent insecurity and killing of innocent people in Kashmir, and said, "The Kashmir issue has no military solution and we should be looking for a diplomatic solution to problems."

Imran Khan, for his part, expressed regret over the saddening incidents for innocent people in Kashmir in violation of the international rules, and said, "The Islamic Republic of Iran as an important country in the region and the Muslim world can play a positive role in resolving the Kashmir issue."