TEHRAN (defapress)- Senior Advisor to Chief of Staff of the Iranian Armed Forces Brigadier General Massoud Jazayeri underlined establishment of security in the Persian Gulf by his country, warning of crushing response to any hostile move.
News ID: 78468 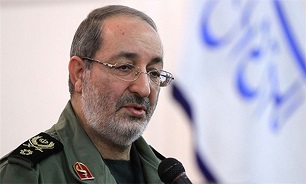 "The policies of the Islamic Republic of Iran about the Persian Gulf and the Strait of Hormuz have fortunately succeeded so far and it will be so in future too," General Jazzayeri said on Saturday.

"The Islamic Republic of Iran has shown that it will confront any hostile measure with wisdom and prudence," he added.

In relevant remarks on Wednesday, Islamic Revolution Guards Corps (IRGC) Deputy Commander Rear Admiral Ali Fadavi underlined that Iran and the regional states and not the foreigners should establish security in the Persian Gulf, describing foreign deployments as a source of instability.

“No doubt, no country other than Iran and the regional countries are capable of ensuring the security of Persian Gulf, Strait of Hormuz and regional waters,” Rear Admiral Fadavi said, blasting the presence of foreign naval fleets in the Persian Gulf.

He chastised the presence of US forces in the region, terming them the main source of insecurity.

Iran has even the power to ensure the security of the whole region, Rear Admiral Fadavi added.

His comments came after the US and Britain announced that they will send nuclear-powered carriers and submarines to the Persian Gulf under the pretext of formation of a coalition to establish security in the region.

The United States has been trying to persuade its allies into an international coalition in the Strait of Hormuz, which accommodates around a third of global seaborne oil traffic, and other strategic Middle Eastern shipping lanes.

Washington’s call has, however, been met with little interest from Washington’s allies, which are concerned that joining such an alliance could drag them into a conflict with Iran.

The French are noncommittal, while Germany, Italy and Sweden have rejected joining the alliance.