Iran’s Power Forces Enemies Not to Speak of Military Option 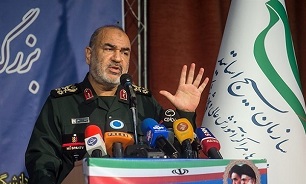 Speaking to reporters in the central province of Markazi on Thursday evening, Major General Salami replied to a question as to why the enemy’s military option against Iran is “no more on the table”, saying, “Because we have become powerful; because we have been invincible and, at the same time, our enemies have been weakened and their options have become really weak.”

“It is evident that the enemy no longer has the capability; once it wanted to act and force us to react, but today, the enemy is not even capable of reacting to our capabilities and this reality is seen today on the battlefields,” the top commander added.

He further pointed to Iran’s progress in defense sector and said, “The (military) achievements are at a level that we do not announce them to the media but (generally speaking,) we are progressing on a daily basis in all areas, including missiles, drones, radars, air defense (gears), vessels, torpedoes, anti-armor missiles, and guided cannons…”