TEHRAN (defapress)- Chinese Foreign Minister Wang Yi stated on Friday that China “will not interfere in the internal affairs of the US”, after President Trump urged Beijing to probe his political rival Joe Biden amid an impeachment inquiry in Washington.
News ID: 78909 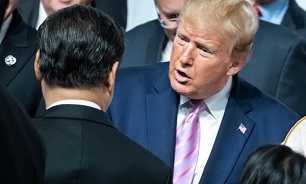 “We trust that the American people will be able to sort out their own problems,” The Global Times reported Wang as saying.

On Thursday, Trump told reporters at the White House that “China should start an investigation into the Bidens, because what happened in China is just about as bad as what happened with Ukraine”.

His request for China to assist in an investigation into Biden, who is running for the 2020 Democratic nomination for president, came as Washington and Beijing prepare for trade talks next week.

“I have a lot of options on China,” Trump noted on Thursday, adding, “But if they don’t do what we want, we have tremendous power.”

On Friday, Trump announced that he would keep issues related to Biden “separate” from trade discussions with China while defending his public urgings to have foreign countries investigate his political rival’s family for unsubstantiated corruption allegations.

“It has nothing to do with it,” Trump told reporters Friday morning before departing the White House, adding, “I want to do a trade deal with China but only if it’s good for our country.”

“One thing has nothing to do with the other,” Trump said.

Trump’s pronouncement triggered widespread condemnation from House Democrats, who opened an impeachment inquiry into the president last week focused on a July 25 phone call during which Trump asked Ukrainian President Volodymyr Zelensky to investigate the Bidens and theories about 2016 election interference.