TEHRAN (defapress)- Syrian President Bashar al-Assad, in a meeting with Chairman of the Iranian Parliament’s National Security and Foreign Policy Commission Mojtaba Zonnour, said what is empowering the resistance front is its principle of fighting against the expansionist and colonialist policies of the West.
News ID: 79285 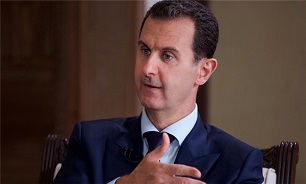 In a Thursday meeting with an Iranian parliamentary delegation, headed by Zonnour, in Damascus, President Assad emphasized that the resistance front's commitment to unchangeable principles is one of the most important factors behind its power in the campaign against terrorism.

"The fight waged by us and our friends against the excessive demands of the West and colonialist countries will continue until the annihilation of their mercenaries," the Syrian president added.

Elsewhere in his remarks, Assad has hailed Iran's unwavering support for his country's fight against enemies' plots to fuel insecurity and instability in Syria and the entire region, saying that the war will end only through the eradication of terrorism.

"They are trying to pretend that it is possible to end the war through the constitutional committee. It is not true," he said.

"The war did not break out because of differences over the constitution, but it started when terrorism began to kill and destroy," the Syrian president added, emphasizing that eradication of terrorism is the only thing that can terminate the war.

The senior Iranian parliamentarian, for his part, said Tehran and Damascus enjoy deep-rooted relations and are fighting against a common enemy.

Zonnour added that Iran and Syria are on the frontline of the fight against the occupying regime of Israel, saying, "Iran will strongly defend the interests of its own and those of its allies in the region."

He said Tehran welcomes the expansion of trade and economic exchanges with Damascus, stressing the importance of further strengthening of inclusive cooperation in the economic sector in order to help Iranian companies reconstruct Syria’s infrastructure.

On Wednesday, Zonnour said in a meeting with Syrian Parliament Speaker Hamoudeh Sabbaq, "Reconstruction of Syria's infrastructures is a necessity at the present juncture and Iranian companies are ready for economic interactions with Syria during the reconstruction era.”

He also stressed that Iran views support for the resistance pivot as its responsibility and will remain beside Syria in fighting against the terrorist groups.

Sabbaq, for his part, appreciated Iran's full-fledged support for the Syrian government and nation, and said that the Iranian military advisors' sacrifices beside the Syrian army led to the Damascus' victory against the terrorists.

Syrian Ambassador to Tehran Adnan Mahmoud, in a conference in Tehran on Tuesday, voiced his country’ enthusiasm for having Iranian companies and investors in the reconstruction of the war-torn country.

Addressing a conference on investment opportunities in Syria, held at Trade Promotion Organization of Iran, Mahmoud said that grounds have been paved for the participation of Iranian investors and contractors in different sectors of the Syrian economy.

He said the Syrian government considers the Iranian private sector its main partner in the reconstruction and economic projects.

Syria has been involved in a war against terrorism since 2011 when the sporadic uprisings in the country were used by extremist groups backed by some states in the region and the West. Most of the occupied territories in Syria have been retaken by government forces and the stability has been restored to the country.

Early in September, more than 60 companies and firms from Iran showcased their capabilities, products and potentials at the 61st edition of Damascus International Fair in Syria, bidding for contracts on reconstruction projects in the war-torn country.