TEHRAN (defapress)- Lieutenant Commander of the Islamic Revolution Guards Corps Rear Admiral Ali Fadavi underlined on Wednesday that none of the IRGC and Basij (volunteer) forces who stood against the outlaws in the recent riots were armed.
News ID: 79472 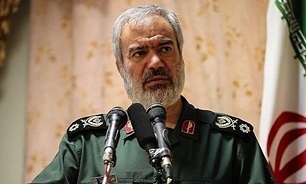 "In the recent incidents, not even one of the IRGC and Basij forces was carrying weapons. We went to the towns without arms while there were many weapons pointed at us," Rear Admiral Fadavi said, addressing a forum in Tehran today.

"But in the streets, we controlled everything comprehensively. Even we had live contacts with all parts of the country and received all images (live)," Rear Admiral Fadavi said.

Iran's Judiciary Spokesman Gholam Hossein Esmayeeli said on Tuesday that armed rioters and outlaws wounded and killed a number of people and policemen during the recent unrests after the protest rallies against the gasoline rationing.

He, meantime, said that the number of individuals killed in the recent riots is less than what some foreign parties claim, "as they name people who have died in other incidents that are different from the recent riots and many of those people claimed to be killed are alive".

Esmayeeli said arson attacks and plundering the banks and stores and killing of innocent people and police officers were all carried out by the hooligans who were affiliated to the anti-revolutionary and dissident groups and were supported by the foreign spy agencies.

"300 people are still in detention in Tehran," Esmayeeli said, adding that the number is still to decrease.

"The outlaws used the most equipped tools and most professional methods in the recent sedition," General Sharif said, addressing a forum in the Central city of Arak.

He noted that the riots were fomented in Iran after the country succeeded in defeating the ISIL terrorist group, the resistance front gained great victories and the IRGC shot down an intruder US spy plane over the Iranian territories on June 20.

"The enemies are seeking to make up [for their failure] after every success Iran earns," General Sharif said.

The protest rallies of Iranian people against the gasoline rationing turned violent since the first hours of the gatherings after the rioters used weapons.

In Sirjan city in the Southern province of Kerman, for instance, armed hooligans were about to detonate gasoline tanks, and almost made it if it hadn't been for the immediate presence of the police troops on the scene.

Security and police reports said the large number of weapons in the hands of the outlaws and rioters which had turned the scene of protests into a battlefield was one of the main features of the unrests.

Investigations showed that most people shot in riots were targeted from behind or the sides from a short range and from among protestors.

Also, reports by the security bodies and witnesses indicated that many of the bullets were fired from inside the protesting crowd and with weapons not registered at official bodies.

Iranian Government Spokesman Ali Rabiyee announced last Monday that rioters used cold weapons and firearms during unrests in some cities and towns, killing and wounding a number of police forces.

"Based on reports, the rioters have repeatedly used cold weapons and firearms in some cities," Rabiyee told reporters in a press conference in Tehran.

Also, Commander of the Law Enforcement Police in Kurdistan province Brigadier General Ali Azadi announced that his forces had arrested 25 ringleaders of the recent riots, and seized 3 rifles from them.

"25 ringleaders and main culprits behind the riots in the two cities of Marivan and Sanandaj have been detained in coordination with the judicial officials and 3 firearms and some cold weapons have been discovered and seized from them," General Azadi said on Sunday.

Late last month, Secretary of Iran's Supreme National Security Council (SNSC) Ali Shamkhani said that Tehran had successfully thwarted an attempt by a small group of foreign-backed rioters to set oil facilities on fire in the iconic Persian Gulf port city of Assaluyeh, adding that the attack was meant to be in retaliation for Yemenis’ bombardment of the Saudi oil sites in September.

He added that during the recent unrests in the country, which came after the government’s decision to substantially increase the gas price, some rioters tried to attack the iconic Persian Gulf port city of Assaluyeh in the South of Iran.

“The attack on Assaluyeh had been planned by the enemy,” according to Shamkhani.

The top Iranian security official added, “the enemy appeared to be seeking to avenge what Yemen Ansarullah did in attacking Saudi facilities, but it failed”.