US to Pay Heavy Price for Assassinating Gen. Soleimani

TEHRAN (defapress) – The US is responsibe for all consequences of assassination of the IRGC Quds Force commander in Iraq, Iranian President Hassan Rouhani said, warning Washington that it will have to pay a heavy price for the martyrdom of General Qassem Soleimani.
News ID: 79793 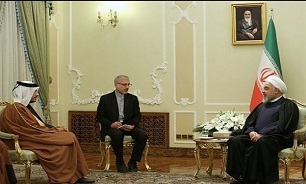 “The martyrdom of General Qassem Soleimani has made our people stronger and more determined than ever,” the president’s official website quoted him as saying.

“The Americans will bear the full responsibility for the consequences of this terrorist act in the region and Washington will pay a heavy price for it,” Rouhani added.

“Unfortunately, the Americans have entered a new path that can be very dangerous for the region. Therefore, in such a condition, close negotiation and cooperation between friendly countries is essential,” the president emphasized.

The Islamic Republic of Iran has never started tensions leading to insecurity in the region, Rouhani said, adding, “What has caused tension and unease in the region in recent years is the United States’ foolish acts.”

He also paid tribute to General Soleimani as a global figure in the fight against terrorism, saying everyone acknowledges his effective role in ensuring regional security, especially in Iraq and Syria.

“I hope that the glorious funeral held by the Iraqi people, and the one that is going to be held in Iran, will make America understand what a grave mistake it has made,” Rouhani added.

“In the current situation, we expect all our friendly and neighboring countries to condemn this criminal act of the US,” the president stated, decrying the US for assassinating a top commander of the Iranian Armed Forces in another country “in the most criminal manner”.

“I hope that we all condemn state terrorism unanimously and that the countries of the region will strengthen their unity, cohesion and understanding more than ever.”

"The recent US action was both an insult to the Iraqi people and a violation of Iraq's national sovereignty,” he deplored.

The president emphasized that the US presence in the region is very destructive, stressing, "Today, all regional countries must believe that as long as America is present in the region, countries of the region will not find peace.”

Rouhani further highlighted the importance of promoting relations between Tehran and Doha, and said, “The Islamic Republic of Iran has always considered close ties and consultations with Qatar to be beneficial for the development of bilateral and regional relations."

“When Qatar was under siege, Iran was alongside the Qatari government and nation, and we will be with you again and we hope that the agreements we made with the Emir of Qatar in Malaysia will be operational and executed as soon as possible," the president added.

“I hope we can bring the countries of the region closer together within the framework of the Hormuz Peace Endeavour (HOPE) initiative,” Rouhani concluded.

For his part, the Qatari official called for closer ties between Tehran and Doha, saying, “Qatar is keen to develop relations with Iran, and considers the Islamic Republic of Iran a neighborly and brotherly country.”

“We are determined to further develop our relations and cooperation with Tehran,” he added.

Al Thani also appreciated Tehran's positions and support for Doha, saying, "Qatar will never forget Iran's support and assistance in the difficult situation we were in, and we consider ourselves alongside Iran.”

He said that Qatar understands the deep pain and discomfort that the Iranian people and the government are enduring in the current situation, saying, “We did not anticipate that such a thing would happen and such a decision would be made one day. Such actions are unprecedented, and we are very concerned about this.”

“Throughout history, Qatar has not received any harm or damage from Iran, while we have had problems and annoyance with those with which we have many things in common,” the Qatari official added.

He went on to say that Qatar supports the HOPE Initiative, adding, “We hope that in the current situation, countries in the region would take a strategic step in the light of the Hormuz Peace Endeavour Initiative, which could be the axis of peace and security in the region.”