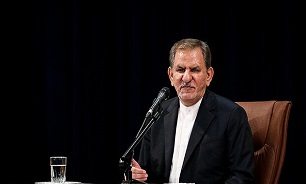 “Iran’s economy has faced challenges by the US sanctions, however, it is still running despite the US’ wish to overturn it,” Jahangiri said during a ceremony in Tehran on Saturday.

Noting that the US economic terrorism has put a lot of pressure on the Iranian nation, the vice president underlined that “the government is making every effort to reduce such burden off people’s shoulders.”

Deploring the Islamic Revolution’s enemies who seize every opportunity to hit the Iranian nation, Jahangiri said the US, and its regional allies, including the Zionist regime and Saudi Arabia, have been sticking to any vicious plot, including sanctions, to reach their objectives against Iran.

However, he added, Iran will continue the path of progress and development despite sanctions and the so-called maximum pressure.

Washington’s so-called maximum pressure campaign against Tehran officially started when Republican President Donald Trump unilaterally pulled his country out of the 2015 Iran nuclear deal officially known as the Joint Comprehensive Plan of Action (JCPOA) in May 2018.

Ever since withdrawing from the agreement, Washington has been trying to bring Iran to the negotiation table for a new deal.

Iran, however, has reiterated that it will not enter into negotiations with the United States unless Washington returns to the 2015 nuclear deal that it has unilaterally quit.

In the past months, the US has also been seeking to force the UN Security Council to extend an arms embargo on the Islamic Republic that will end in October.

Washington has threatened that if the Security Council does not comply with its request for an extension of Iran's arms embargo, it will seek to activate the trigger mechanism as a participant in the JCPOA and return all anti-Iranian sanctions.