TEHRAN (defapress)- Foreign Ministry Spokesman Seyed Abbas Mousavi said that the Iranian Islamic culture is famous for peace and friendship, adding that terrorism and genocide are the features of those who seek identity via denying others.
News ID: 81512 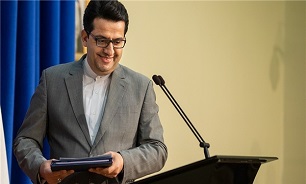 Throughout history, Iranians have always been known as a peaceful nation whose signs are evident in Iranian literature, including the works of renowned poets like Mowlana and Ferdowsi, Mousavi said.

Evil phenomena such as terrorism, expansionism, racism and genocide are the product of postmodern man who seeks his identity through the absence of others, he added.

Peace and security are among the most important requirements for human rights, without which other human rights will be endangered, the diplomat said.

In relevant remarks in early November 2019, Mousavi said that Tehran is following a diplomacy of peace and friendship, adding that Iranian cities have signed more than 140 twinning agreements with cities across the world in the past 40 years since the victory of the Islamic Revolution to contribute to this cause.

Addressing the Fourth Tehran Golden Adobe Award late on November 2, Mousavi described urban diplomacy as the most known popular communications, saying that after the victory of the Islamic Revolution, some 140 sisterhood agreements between the Iranian cities and those in five continents.

"The main aim of the Islamic Revolution is sending a message of peace, friendship, interaction and producing a discourse associated with justice and development with nondiscrimination and freedom with public rights," the foreign ministry spokesman said.

He added that today diplomacy does not focus on war and peace alone; rather it encompasses human interaction, trade, scientific and technological cooperation, removing poverty and countering global challenges, including terrorism and environment.

Unlike the past, today, a wide range of actors have entered the diplomatic arena and made use of various tools, including dialogue, compromise, and haggling, he said.

The main player is public opinion both in the domestic and international scenes, he contended, adding that today people and public opinion play a crucial role in both society and politics.

Iran has signed over 140 sisterhood agreements over the past 40 years since the victory of the Islamic Revolution, the diplomat said, noting that all the issue reveals that Iran has mainly focused on public, general and urban diplomacy and forging a relationship with the other societies complying with the Islamic Revolution's principles.

Urban diplomacy can serve as a mechanism for transferring the message of peace and friendship, justice-seeking and freedom-seeking of the great Iranian nation, Mousavi said.