TEHRAN (defapress) – Iranian First Vice President Es'hagh Jahangiri called on the Iraqi government to follow up on the case of the assassination of Lieutenant General Ghasem Soleimani by the US.
News ID: 81606 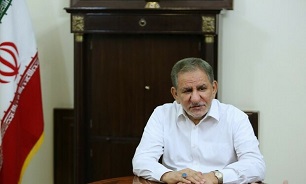 He made the remarks on Tuesday evening in a meeting with the Iraqi delegation led by the visiting Prime Minister Mustafa al-Kadhimi.

Elsewhere in the meeting, the Iranian official said that ties Tehran-Baghdad in different fields such as energy has been expanded, however, there are still other various fields for the expansion of economic relations.

Pointing to financial and banking relations as a prerequisite of expanding economic ties, Jahangiri called for the implementation of agreements between Iran and Iraq in the field of finance and banking sector.

During the meeting, the Prime Minister of Iraq, Mustafa al-Kazemi noted that the Iraqi nation is interested in boosting the relations with the Islamic Republic of Iran as both sides have historic, cultural, and religious common grounds.

"Mutual history and values are the reasons that Iraq and Iran have common interests and this factor shows that we should create a great economic partnership between the two countries," he said.

Mustafa al-Kazemi also expressed the readiness of Iraq for the activation of the Joint Economic Commission as well as the High Commission of the two countries.