Iran to boost defense power whether or not sanctions lifted

TEHRAN (defapress) – The Head of Iran Aviation Industries Organization asserted “We are not waiting for the lifting of sanctions to strengthen our defense power, and also we are planning to cooperate with other countries in the field of exports.”
News ID: 81852 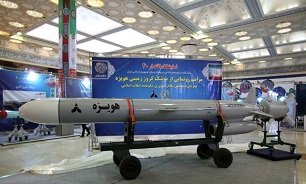 While speaking in a live IRIB TV program, Brigadier General Afshin Khajeh Fard referred to the fact that Iran ranks fourteenth among powerful military countries, adding that this status demonstrates Iran’s military power in the world.

Describing drones as one of the indicators of all countries' air combat capability, he also mentioned, “International organizations have ranked Iran fifth among other countries in the field of drones.”

Hailing Defense Ministry’s initiativeness in designs of engines and aircraft, he added that the domestic designs can help the country perform better on the battlefield because the enemy will be unable to understand the mechanism of the homegrown products.

"We will definitely meet our domestic needs to strengthen the deterrence power of the country”, he said and also stressed, “We will not wait for the lifting of the sanctions.”