Pompeo Announces Restrictions on Chinese Diplomats in US

TEHRAN (defapress)- Secretary of State Mike Pompeo on Wednesday announced new restrictions on the freedom of movement for Chinese diplomats in the US, the latest salvo in deteriorating Sino-American relations as the administration of President Donald Trump increases pressure on Beijing.
News ID: 81926 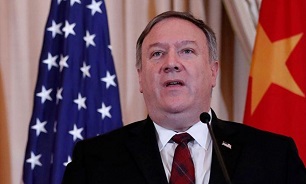 Pompeo said the latest actions are a direct response to long-held restrictions on American diplomats working in China, The Hill reported.

“For years, the Chinese Communist Party has imposed significant barriers on American diplomats working inside the PRC [People’s Republic of China],” Pompeo stated in a briefing with reporters.

Under the new restrictions, senior Chinese diplomats will need approval from the State Department to visit American university campuses and meet with local government officials. Approval will also be required for cultural events for more than 50 attendees happening outside the Chinese embassy or consular posts.

The State Department last year placed restrictions on Chinese diplomats in the US, requiring them to notify the agency of any meetings with local government officials or events on university campuses, though prior approval was not required.

The secretary said the State Department’s actions are in response to restrictions on American diplomats who he said are subject in China to “a system of opaque approval processes” that limit their ability to freely interact with Chinese society, on university campuses, with the press and on social media.

“We’re simply demanding reciprocity," he stated, adding, "Access for our diplomats in China should be reflective of the access that Chinese diplomats in the United States have and today’s steps will move us substantially in that direction.”

In July, the US ordered the closing of the Chinese consulate in Houston and the expulsion of its diplomats. Beijing retaliated by closing the US consulate in Chengdu.

Relations between the two countries are considered at their lowest point since diplomatic ties were established 41 years ago.

The Trump administration has blamed Beijing for the spread of COVID-19, and the two countries have also clashed over trade, intellectual property, human rights abuses and Chinese claims in the South China Sea and Beijing's imposition of a National Security Law over Hong Kong.