TEHRAN (defapress) – President Hassan Rouhani says the United States has failed in the immoral and illegal economic terrorism it has been waging against the Iranian nation in the past two years.
News ID: 82565 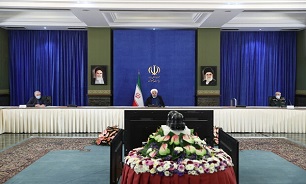 “The US regime did not seek a mere economic pressure on Iran, but it was also trying to create famine in the country,” Rouhani also said in a Cabinet session on Wednesday.

While the US has been able to put some pressure on our people in the economic sphere, Rouhani said the American government has failed in the political, legal and moral spheres in its warmongering against the country.

“Americans sought to create social tension in our country and disrupt internal security, but they failed in all their goals.”

Rouhani referred to US President Donald Trump’s ambitions to make all other countries follow him since he left the Iran nuclear deal in 2018, adding, “But, no country followed him, not even the European Union, a traditional friend of the United States, and neither did China and Russia.”

“He‌ failed to lead others along the wrong path he had begun. Every political plan that the United States had in the United Nations and in international forums failed,” Rouhani underlined, referring to the lifting of Iran’s arms embargo after years, despite the US’ struggles to disrupt the process.

Rouhani added, "Thank God, our economic and social conditions are improving these days. There are signs that we are seeing declining commodity prices, currency, and so on.”

The president said the government is trying to continue this trend.