TEHRAN (defapress) – The Political-Ideological Director of the Ministry of Defense said that readiness of the Armed Forces is ‘deterrent’.
News ID: 82657 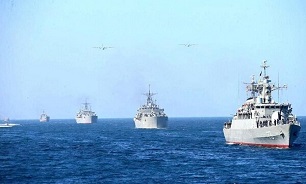 In a congratulatory message on the occasion of Iran’s Navy Day on Fri. sent to Iran’s Navy Commander Rear Admiral Hossein Khanzadi, Hojjatoleslam Seyyed Ziaeddin Aghajanpour said, “"Increasing readiness of the Armed Forces will deter and frighten enemies. We must strengthen ourselves and be prepared to face the enemy's threats and conspiracies in line with foiling their plots."

He pointed to Azar 7 (Nov. 27) as a memorable and lasting day in the glorious history of the Iranian nation.

Iran’s Navy Day is reminiscent of the bravery, heroism and courage of navy forces and commanders in defending islands, ports, coasts and seas of the country against the invasion of enemies, he emphasized.

“Experience has shown us that we must strengthen ourselves and be prepared to face threats and conspiracies orchestrated by enemies against the country so that increasing readiness of the Armed Forces will deter and frighten enemies,” he added.

Confronting and battling US invading forces, controlling and inspecting ships in the Persian Gulf and the Strait of Hormuz as well as the serious presence of Iran’s Navy forces in international waters is a sign of authority and readiness of the Armed Forces of the Islamic Republic of Iran, he said, adding, “All countries show know that our dignity lies in authority and resistance against the Global Arrogance with promoting and strengthening defense capabilities,” head of Ideological-Political Department of the Ministry of Defense stated.