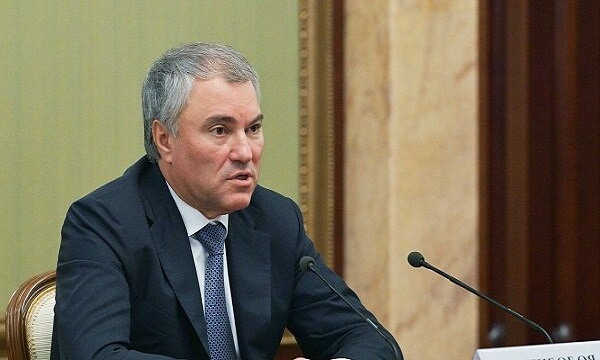 In a joint press conference with Iranian Parliament Speaker Mohammad-Bagher Ghalibaf in Moscow on Monday, Volodin criticized the stance of the United States and the European Union, which prevents the distribution of new drugs and vaccines.

"The position of the United States and the European Union, which prevents the distribution of new drugs and vaccines, is unacceptable," he said.

"Some governments who claim to be human rights supporter impose harsh sanctions in the wake of the Coronavirus crisis, reducing the quality of life of the nations rather than helping to cure the disease," he added.

He noted that Moscow and Tehran need to strengthen convergence to overcome regional and global challenges.

"The purpose of our talks is to be able to achieve real results and develop relations between Iran and Russia in the fields of energy, agriculture, and transportation, and to provide conditions for the expansion of trade and economic relations between the two countries," he added.

He announced that by the invitation of Ghalibaf he will make a trip to Tehran in Spring.

"Russia and Iran have a common struggle with sanctions, trade wars, and double standards, which have been imposed not only against us but also against China and North Korea."

He further noted that these trade wars are waged by the United States against Russia and Iran overtly or under the name of protecting European markets.

The Russian official also said that in his today's meeting with the Speaker of the Iranian Parliament, the two sides talked about holding a conference on regional cooperation and security.

"Iran, Russia, China, Turkey, Afghanistan, and Pakistan participate in such conferences which are held in each of the countries every year," he added.

"The first meeting was held in Islamabad, Pakistan, then in Tehran and Turkey, and now it is Moscow's turn," he said, "We have announced our readiness to hold this conference at the end of the year and preparations are getting done."

Volodin noted that some countries try not to send medical aid to other people. "The United States and the European Union are trying to develop their own vaccine projects and prevent other countries from advancing theirs, while it is not clear how useful their drugs and vaccines are."

Referring to the sending of the Coronavirus vaccine by Russia to Iran, he said: "Cooperation and talks between Iran and Russia in the field of health and helping the citizens of the two countries to overcome the pandemic are underway and conditions must be provided to have other countries find access to the vaccine."