TEHRAN (Defapress) - The chief commander of the Islamic Revolutionary Guards Corps (IRGC) hailed the Iranian nation’s resistance through the past decades, which has led to the hampering of all enemy plots in different areas.
News ID: 83128 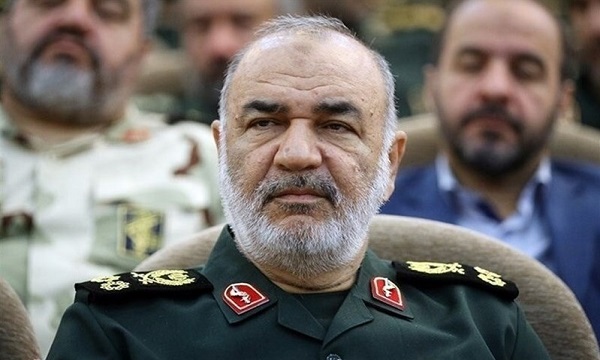 “Our nation has been obstructing the enemies’ evil plots in the past 42 years [since the victory of the Islamic Revolution] as today, we are the ones that set conditions [for talks] and decide for our own destiny,” Major General Hossein Salami said in a conference in Tehran on Sunday.

Referring to the nature of resistance in the Islamic Revolution and the praiseworthy commitment of the Iranian nation, the IRGC chief said, "Our Revolution is a continuation of the mission of the divine prophets, the same mission that came to pure the earth.”

Therefore, he noted, it is obvious that the enemies from across the world would be against such a spirit, and subsequently, make every effort to obstruct its path.

All of the enemy’s dreams and objectives have ended in failure, the general said, adding that the policy of maximum pressure, for instance, has also failed to prevent Iran from boosting its capabilites, including those in the defense sector.

“We are witnessing the decay and weakening of the enemy and it does not look like a power and empire anymore."

He concluded, "The enemy today has realized that power is what we have. Today, we set condition [for talks] for the enemy, and this is due to the power of the righteous people, who were able to understand the truth of life."