TEHRAN (Defapress) - Vladimir Putin said after the Geneva summit that Russia and the United States have reached an agreement to return one another's ambassadors to their respective diplomatic postings.
News ID: 83466 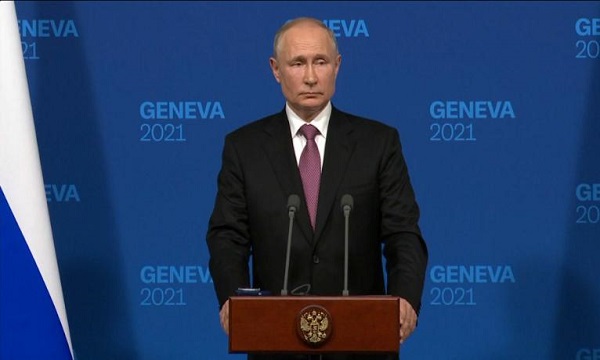 The agreement was reached at Wednesday's marathon 4.5 hour-long summit between the presidents in Geneva, Switzerland, according to Sputnik news agency.

As for the return of the ambassadors to their posts - the US ambassador to Moscow and the Russian ambassador to Washington, we agreed on it, this issue has been resolved," Putin said, speaking to reporters following his summit with Biden.

Russian Ambassador to the United States Anatoly Antonov left Washington and returned to Russia in April for consultations in the wake of a diplomatic scandal that came about after Biden agreed with a journalist's characterization of Putin as a "killer" with no soul. US Ambassador to Russia John Sullivan left Moscow the same month. The diplomatic spat was exacerbated after the Biden administration slapped Russia with a new round of sanctions, targeting the country's sovereign debt and introducing other major financial and banking sector restrictions on the Eurasian nation.

The Russian president also confirmed that he and Biden had discussed nuclear weapons, and said that Russia and the United States bear a special responsibility for ensuring global strategic stability.

Elsewhere in his remarks, Putin commented on the heightened military tensions between Russia and the US and its allies and Washington's "concerns" about Russia's military activities.

"We conduct exercises on our territory in the same way that the United States conducts many exercises on its own territory. But we don't engage in drills by dragging our military equipment and personnel to the state borders of the United States of America. Unfortunately, our American partners are doing this right at this very moment. Therefore, 'concerns' about this situation should be expressed not by the American side, but by the Russian side," he said.

Putin confirmed that the topic of the Arctic had been discussed "in detail" at the summit.

As to US claims about Russia's violations of human rights, Putin wryly pointed out that the US's illegal detention center at Guantanamo Bay was still open. Commenting on the Black Lives Matter protest movement in the United States, Putin said that while Russia sympathizes with the American people, it does not want and will not allow for similar widespread protests to take place on its territory.