TEHRAN (defapress) – FM Zarif delivered a speech in the international conference for security and sustainable development where he said that Iran has fulfilled its commitments under JCPOA and has proved its compliance with the principle of non-proliferation and nuclear disarmament.
News ID: 66938 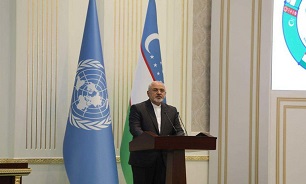 The complete speech delivered by FM Mohammad Javad Zarif in the international conference for security and sustainable development in Samarkand, Uzbekistan is as follows:

"In the Name of God, the Compassionate, the Merciful

I would like to extend my sincere thanks for the warm hospitality of the Uzbek government and the officials of the International Conference on Security and Sustainable Development in Central Asia in the beautiful and historic city of Samarkand.

The beautiful city of Samarkand has always been a link that connects various ethnicities and Persian, Uzbek and Tajik communities. The city has also been a junction linking East and West through the Silk Road, and been considered as the center of civilization in the historical and cultural fields of the ancient Asia whose famous literary figures, poets and scholars played a significant role in science, art, culture, and formation of human civilization.

Security in the present-day interconnected world is not limited to military dimensions, and is a multifaceted, intertwined and comprehensive issue.

Today, you cannot buy security with hundreds of billions of dollars and ship it to the county. Commercialization of security is a new topic added by some international and trans-regional powers to political terms, and unfortunately they have good clients in this dollar-for-security deal.

Today, security is an integrated and correlative issue in which security of one depends on the security of the other.

The era of unilateral security and living in ivory towers and ensuring security based on military power has come to an end since a long time ago. This is the lesson that trans-regional meddlesome powers and the countries that seek to create insecurity by putting the security of others at stake to achieve their fabricated security, have well learned after the events in Iraq, Syria, Yemen and Afghanistan.

Nowadays, in order to achieve security, all must rely on "people” as the most important element of a country's security to attain an endogenous security, and then achieve a sustainable and collective security through a constructive engagement with neighbors.

Since the independence of the Central Asian Republics, the Islamic Republic of Iran has always been a pioneer in establishing a fraternal, brotherly and balanced relations based on the principles of mutual respect and interests. The strategy of the Islamic Republic of Iran is based on the development and boosting of cooperation in various fields, making efforts to establish and maintain peace and stability in the region, as well as convergence and cooperation with regional institutions and international organizations.

We have always been considering the security and stability of our neighbors and neighboring regions as our own security and stability. Contributing to the resolution of disputes and tensions, bilateral security collaborations to counter the common threats of Takfiri terrorism, extremism, drug trafficking and illegal immigration are the most important manifestations of the active and effective participation of the Islamic Republic of Iran in boosting and strengthening stability and security in the Central Asian region.

Effective confrontation with extremism and Takfiri terrorism, which poses a serious threat to the security and stability of the region in West Asia, Central Asia, the Caucasus, the Indian subcontinent, and even the regions in North Africa and Southeast Asia, needs the all-inclusive and multilateral cooperation, interaction, synergy, and consultation of regional countries. More important than military confrontation is the study of the root causes of the formation of these anti-Islam movements and the identification of the financial resources, political sponsors, and ideological origins of Takfiri terrorism as the prerequisites for effective and decisive fight against the roots of terrorism and extremism. The World Against Violence and Extremism (WAVE) initiative, which was proposed by President Rouhani and adopted by the UN General Assembly in 2013, can provide an appropriate global framework for collective cooperation in Central Asia.

Establishing a Nuclear-Weapon-Free Zone in Central Asia is a move that shows a good understanding of security. The Islamic Republic of Iran is not only religiously opposed to the development, production, and use of such weapons, but also seriously believes that these weapons per se undermine stability and security, and must be eliminated from the world. Since 1974, when Iran proposed a Nuclear-Weapon-Free and WMD-Free Zone for the Middle East, the country has pursued the issue, but to no avail because of the aggressive and hegemonic policies of the Zionist regime of Israel in acquiring nuclear weapons, and the US support for Tel Aviv. By clinching the nuclear deal and fulfilling all our commitments under the Joint Comprehensive Plan of Action (JCPOA), we have in action proved our compliance with the principle of non-proliferation and nuclear disarmament.

Within the past 25 years, the Islamic Republic of Iran has tried to have a proper role and share in expansion of economic cooperation in Central Asia in different fields including business, energy, investment, banking and monetary collaborations, and the implementation of construction projects. Iran’s private sector has completed tens of development projects such as dam and hydropower plant, road and railroad, mineral explorations, and industrial units. We have also provided regional countries with our infrastructures and transit capacities in land and rail transportation.

Finally, I would like to reaffirm that the policy of having active and comprehensive interaction with neighbors is the main priority of the Islamic Republic of Iran’s foreign policy. We welcome the Central Asian Republics’ approach of increasing regional cooperation and the Uzbek government’s prudent policy of prioritizing the reinforcement of relations with the region. I once again appreciate the warm hospitality of the government of Uzbekistan and the organizers of the conference, and hope that we would witness the development and extension of peace, stability, and security in Central Asia by virtue of expansion and reinforcement of interaction and cooperation.”

The president of Uzbekistan, the high representative of the European Union for Foreign Affairs and Security Policy Federica Mogherini and the foreign ministers from regional countries such as India and China, along with some US officials, attended the conference.

Following his speech, FM Zarif will negotiate with officials of several countries, such as Federica Mogherini.