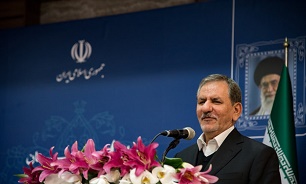 Speaking at the second international conference on introducing investment opportunities and sustainable development in Makran Coast, First Vice-President Es’hagh Jahangiri deemed Makran a key strategic area for Iran, saying that developing the coast could solve many challenges facing the country, including the unemployment issue.

Development of Makran Coast could also bring about regional justice and empower the locals, he added.

Jahangiri noted that the Makran plan predicts one million residents, adding that industry, oil and gas fields can be further developed in this area.

The VP then noted the Chabahar trilateral agreement between Iran, India, and Pakistan which has been described as a game changer for regional connectivity, creating a regional trade, investment and transportation hub with links from the Indian Ocean to Central Asia.

Another major plan currently underway, according to Jahangiri, is the transfer of a part of Iran’s oil exports from the Persian Gulf to the Sea of Oman in Jask, Hormozgan province.

According to Brigadier General Amir Hatami, the conference on investment opportunities and sustainable development in Makran Coast is "a great chance for domestic and foreign private sector investors to become familiar with the unique opportunities in petroleum and gas, transit and transportation, tourism and the development of new urban areas.”