Iran’s defense min. due in Moscow on Tuesday 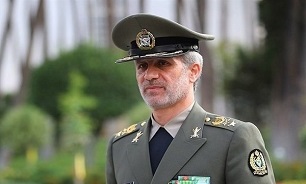 Hatami’s visit will be made upon the official invitation of his Russian counterpart Sergey Shoygu.

The Iranian minister will deliver a speech to security experts at the conference.

He will also hold separate meetings with his counterparts from different countries, including Russia, to discuss bilateral ties and regional developments.

According to the website of Russian Defense Ministry, the three-day conference, which will kick off on Tuesday, “will encompass the problems of utmost significance in terms of shaping views on the international security. Separate plenary sessions will offer space to exchange views on modern military challenges and threats, including the improvement of the arms control system.”

“Situation in the Middle East will be discussed with an emphasis on nation-wide stabilization of Syria. Subject-matter panel sessions will consider peacekeeping, military-to-military engagements, regional security in Asia, Africa and Latin America.”