TEHRAN (defapress)- Top Military Aide to the Supreme Leader Major General Yahya Rahim Safavi said that the US is well aware of Tehran’s growing power in the region, adding that Washington is deceptively exerting pressure against the Islamic Republic to allay its fear from Iran’s growing influence.
News ID: 78821 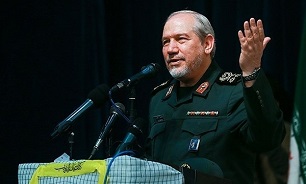 Calling US’ policies oppressive and its officials as deceivers, Major General Rahim Safavi noted that the Americans are fully aware of Iran’s power in the region.

“Our power has improved beyond the Iranian borders. We have changed from a national power into a regional one and the Americans are well aware of the meaning of Iran’s influence in the region. Their pressure on Iran is a result of their anger at our influence,” he said.

“If one observes the events occurred at the UN General Assembly in the past few days, they can understand Iran’s logical and robust behavior towards the Americans and that Iran has become so powerful that it can withstand their pressures,” he added.

“Americans and Zionists and their minions have become weak and America's weakness is shown in their disability to control the situation in Syria and also to overthrow Bashar al-Assad,” the Iranian Major General said.

On Wednesday, Lieutenant Commander of the Islamic Revolution Guards Corps (IRGC) Quds Force Brigadier General Esmayeel Qa'ani underlined that Iran prevented the US from destroying the entire region through its direct and proxy wars against the regional states.

"Had it not been for the Islamic Republic, the US would have set fire to the entire region," General Qa'ani said, addressing a ceremony in the Northeastern city of Mashhad on Wednesday night.

He also underscored Iran's support for the resistance front against the US and its allies, and said, "The Iranian nation has proved itself and therefore, it influences other countries."

General Qa'ani also emphasized Iran's high defense power, and said, "The US sat to the negotiating table (in the nuclear talks) after it failed to succeed in war against the Iranian nation."

Iran played a military advisory role in Iraq and Syria to help the two Islamic nations against the terrorist groups.

In relevant remarks in 2018, former IRGC Major General Mohammad Ali Jafari asserted that had it not been for Major General Qassem Soleimani, the region would have still been grappling with Takfiri terrorists.

The top commander lashed out at US Secretary of State Mike Pompeo's "impolite rhetoric" against IRGC Quds Force Commander Major General Qassem Soleimani at the time.

"It is known to all that the unique initiatives of Qassem Soleimani saved the Islamic territories from the evil of Takfiri terrorists who were mercenaries of yours," Jafari addressed the US top diplomat, criticizing the US for instrumental use of terrorists.