US Veterans Demand Apology from Trump over Comments on Brain Injuries

TEHRAN (defapress) - The vast majority of Catalonia's almost 1,000 mayors on Saturday urged authorities in Madrid to grant the region the right to determine its own future, as crowds of separatists readied for a protest march in Barcelona later in the day.
News ID: 79098 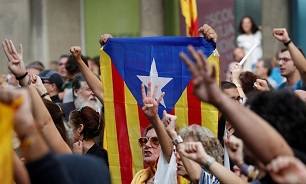 The Catalan capital has been convulsed by almost two weeks of daily demonstrations since nine politicians and activists were jailed for between nine and 13 years for their role in an independence bid in 2017 that Spain's courts had declared illegal.

Mayors representing 814 of the region's 947 local authorities gathered at the headquarters of the regional government to present its leader Quim Torra with a document whose core message - liberty for political prisoners, dialogue and self-determination - they had all endorsed.

To chants of "independence", Torra said: "Your presence is a sign of unity, a unity that is necessary and that we need to maintain against repression.

"We have to be capable of creating a republic of free men and woman ... And overcoming the confrontational dynamic with a constructive one."

The gathering marked the opening act of a day of protest due to culminate in a march through the city centre that organizers Assemblea Nacional Catalana and Omnium Cultural - grassroots groups whose leaders are among the nine serving jail terms - hope will draw the largest crowds of any demonstration since the sentences were passed.

Both groups say they are committed to peaceful protests, but some of last week's marches were marred by violence, including clashes between demonstrators and police.

In an interview with Reuters last week, Torra called on Madrid to open talks with a view to the region holding a second referendum.

Spain's main parties, including the minority Socialist government, have consistently rejected any moves towards secession, a stance they have reiterated in recent days as the country gears up for a national election on Nov. 10.