Rouhani Not Planning to Talk with US Officials in Tokyo

TEHRAN (defapress)- Iranian Deputy Foreign Minister Seyed Abbas Araqchi announced that President Hassan Rouhani has no plan for holding talks with the US officials during his upcoming visit to Japan.
News ID: 79597 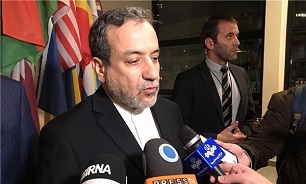 Araqchi made the remarks while speaking to reporters on the sidelines of a conference held on Iran-Japan trade relations in Tehran on Monday and in response to a question about the possibility of contacts between Tehran and Washington during President Rouhani's upcoming visit to Japan.

“No; there is no such plan during [Rouhani's] visit to Japan,” Araqchi, also a former Iranian ambassador to Tokyo, said.

Addressing the conference earlier on Monday, Araqchi told the attendants that Rouhani will set off on his Japan visit on Friday, which takes place on the official invitation of Japan's Prime Minister Shinzo Abe, and reciprocates Abe’s Tehran visit in June 2019.

He noted that Rouhani's visit to Japan is an intensive working visit and the Iranian president will be in Japan less than 24 hours.

“The main topic of President Rouhani’s visit is to pursue the expansion of bilateral relations and facilitate consultations between the two sides about regional conditions and international issues,” the Iranian deputy foreign minister for political affairs said.

In May 2018, US President Donald Trump unilaterally pulled his country out of the international nuclear deal, officially known as the Joint Comprehensive Plan of Action (JCPOA) signed between Iran and major world powers in 2015 and he later re-imposed the sanctions that had been lifted against Tehran as part of the agreement.