TEHRAN (defapress) – Secretary General of Lebanese Resistance Movement Seyyed Hassan Nasrallah said that the current situation for the Resistance Front is similar to the ‘Meccan boycott of Hashemies’.
News ID: 81049 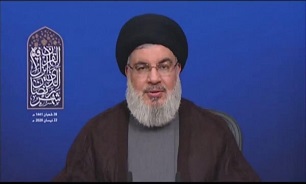 He made the remarks on a Friday night’s televised speech during the holy month of Ramadan and said, “the situation for resistance front in the region and Lebanon is like the situation of Meccan boycott of Hashemites.”

Seyyed Hassan Nasrallah likened the sudden outbreak of coronavirus global pandemic and creation of dire consequences for the world community and economy to the lifting of siege of Bani Hashem in “Shaab Abi Talib” [name of a valley around Mecca].

He pointed to the indifference and inattention of many countries in the world to the unilateral and unjust US sanctions after the outbreak of the novel coronavirus and added, “the condition has become so aggravated in such as a way that not only sanctions have been sidelined, but also many international organizations and world countries have considered the continuation of sanctions and siege ‘immoral and illegal’ and have called for lifting these sanctions imposed by the United States.”