TEHRAN (defapress) – The second-in-command of Lebanon’s Hezbollah resistance movement said the 2000 liberation of southern Lebanon from the Israeli occupation put an end to the regime’s so-called “military invincibility”.
News ID: 81188 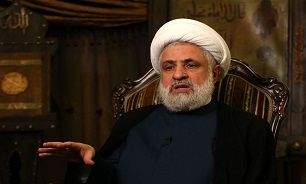 Hezbollah Deputy Secretary-General Sheikh Naim Qassem made the remarks on Monday as Lebanon was celebrating the 20th anniversary of the end of Israel’s occupation, Lebanon’s Arabic-language al-Manar television network reported.

The official said that thanks to the blow dealt to the Israeli military two decades ago, “we have moved from the stage of despair to hope, from surrender to resistance, from humiliation to honor, and from defeat to victory.”

Qassem said the liberation of southern Lebanon opened the door to more consecutive victories for Lebanon, Palestine and the entire region against the Zionist regime and American plots, including the creation of the Daesh terror group.

The historic triumph, he added, put an end to the Israeli military’s invincibility myth and helped strengthen the faith of the young generations in resistance and struggles towards liberating Palestine from the Israeli occupiers.

The developments that unfolded in the region over the past years proved that pro-Israel world powers and the solutions that they offer for regional conflicts cannot be trusted, he added.

“We are currently in the midst of a war and there is still a need for resistance,” said the Hezbollah official, emphasizing the necessity for the resistance front to stay fully ready for any future scenario, Press TV reported.