TEHRAN (defapress) – Iranian President Hassan Rouhani expressed readiness to work in close cooperation with the newly-elected Parliament during the remaining year of his administration.
News ID: 81195 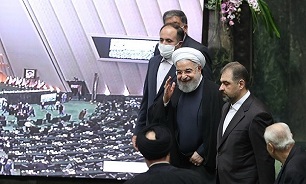 In an address to the first session of the new Parliament on Wednesday, Rouhani said his cabinet will cooperate with the newly-elected legislature on the basis of the Constitution.

“We hold the Parliament and every single MP accountable before the entire Iranian nation from the viewpoint of the Constitution,” he said.

The president added that the best shape of cooperation would happen when the administration submits a good bill and the Parliament discusses and ratifies the bill.

“I hope that we could work in cooperation in this regard during the remaining year of this administration and the first year of the Parliament,” Rouhani went on to say.

The newly-elected Iranian lawmakers held the first session of the 11th Parliament after victory of the Islamic Revolution on Wednesday.