TEHRAN (defapress) – Speaker of the Iranian Parliament Mohammad Baqer Qalibaf warned of the evil plots the enemies have hatched to harm the Islamic Republic, saying the adversaries would have no compunction about committing crimes against the Iranian people.
News ID: 81266 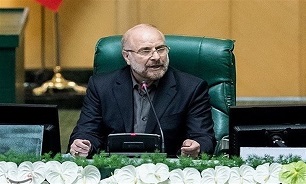 In an address to a Sunday session of the Parliament, Qalibaf paid tribute to the people and security forces who were killed in a terrorist attack on the Iranian Parliament three years ago.

He said the 2017 attack on the Parliament by members of the Daesh (ISIS) terrorist group was a reminder of the enemies’ evil dreams of hurting Iran.

Without the efforts by the Iranian soldiers and guardians, the enemy would feel no compunction about committing crimes against the people of Iran, he added.

Qalibaf also pointed to the evidence that the spy agencies of the US, the Zionist regime and certain regional states were behind the terrorist attack on the Parliament, saying the enemies had plots for massacre of people in the streets of Tehran.

On June 7, 2017, terrorists launched simultaneous attacks on Iran’s parliament building and on the mausoleum of late founder of the Islamic Republic Imam Khomeini in Tehran.

Daesh claimed responsibility for the attacks, which killed 17 people and wounded more than 40.

All five gunmen directly involved in the attacks were killed by security forces.