TEHRAN (defapress) – Belarusians chanting "Step down!" filled the center of the capital Minsk on Sunday in the biggest protest so far against what they said was the fraudulent re-election a week ago of longtime President Alexander Lukashenko.
News ID: 81797 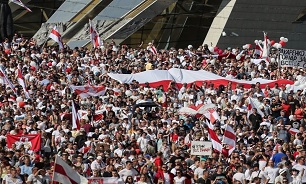 Chanting "Leave!", the opposition supporters marched down Independence Avenue, some carrying a red and white flag, once the state flag and now used to represent opposition to Lukashenko's government.

"It's unbelievable what I am seeing here right now, there are up to 100,000 people here. Huge crowds," said Vaessen. "This is something Lukashenko was not expecting."

Demonstrators held placards with slogans such as "We are against violence" and "Lukashenko must answer for the torture and dead".

A violent police crackdown on protesters saw more than 6,700 people arrested, hundreds wounded and two people dead. Many protesters alleged they were tortured in custody.