TEHRAN (defapress) – Iran on Thursday marked the second anniversary of the demise of Ayatollah Akbar Hashemi Rafsanjani in a ceremony in Tehran.
News ID: 74875 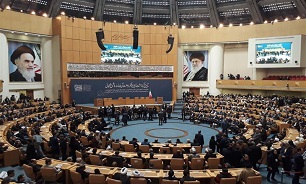 The ceremony opened with a speech by Iranian President Hassan Rouhani.

The president said that Ayatollah Hashemi played a major role in the victory of the Islamic Revolution in 1979 and also the country’s nuclear industry.

Other dignitaries including senior officials and lawmakers were also present at the event.

Ayatollah Rafsanjani passed away on January 8, 2017 of a heart attack. The body of the first-generation revolutionary was buried in the mausoleum of Imam Khomeini, the founder of the Islamic Republic, in southern Tehran.

He started his political career in the 1960s, acquainting himself with the views of the to-be founder of the Islamic Revolution Ayatollah Ruhollah Khomeini.

Soon he proved leadership qualities, winning the trust of Ayatollah Khomeini. He was arrested time and again by security forces of Mohammad Reza Pahlavi, the last monarch of Iran, for his key role in anti-monarchy campaigns.

With the triumph of the Islamic Revolution in 1979, Rafsanjani became the first parliament speaker of the post-revolution Iran.

In 1980, Ayatollah Khomeini tapped Rafsanjani as commander of the war after Iraqi dictator Saddam Hussein waged the war against the fledgling revolution.